"Anklebiters" is a song written by Hayley Williams, Taylor York, and Justin Meldal-Johnsen, performed by Paramore. This song is the tenth track of Paramore's self-titled album.

This song included a music video but was not a single.

The term 'Anklebiters' came from the words 'haters' or negative people and friends that always want to bring you down. Hayley Williams had said it was great because it can address toddlers, kids, and adults. She had also mentioned how the title was created before the lyrics were made, which was something unusual since the title was the last thing the band makes when they are done. Williams had also mentioned how the song "framed the album together", which is most likely why it is one of the middle tracks of the entire 17 songs in the album.

The song had also had a relation to growing up, which the fourth album itself was mainly about. In Kerrang! Magazine it was said that the song was about how many people want to bring you down in life, but you have to ignore them and be yourself. Following what other people do isn't representing what you truly are. When the band had explained the song to many magazines, they often used 'grow up' and many references which lead to growing up and moving on.

'Anklebiters' had received critical acclaim from Billboard, MTV Buzzworthy, and Popdust. Popdust had given the song an overall 4.5/5, saying the song was "an upbeat, scream-along return to Paramore’s emo-punk roots. The best part? It’s an affirmation to please nobody but yourself! Perfect for psyching yourself up before leaving the house for a nerve-wracking night on the town." Billboard had reviewed each song from the self-titled album, saying "The hip-hop community refers to naysayers as "Haters," but Paramore calls them "Anklebiters"—folks who prey on other people's actions. "Someday you're going to be the only one that you've got," Williams sings to those that should rely on their own thoughts and not what anklebiters are saying.". MTV Buzzworthy had also reviewed each track from the album, saying 'Anklebiters' was "a fuzzy, scrappy track that starts in The Strokes‘ garage and kicks away the haters: “Why do you care what people think?” Williams rips. Good question. Turn this one up loud enough and for 2 minutes and 17 seconds, you won’t.". All three reviews had mentioned that the song was not much of a pop song, but more like a pop-punk that included a screameo.

Despite not being a single, the band had thought the song was special and had become a promotion which ended up becoming a music video. The music video had included special design sketches, and had based the idea on people trying to bring you down, but you can always stay away from those people. These sketches had included an 'anklebiter' which was a drawing with teeth chasing a character around. The character(s) had been saved many times from different objects - such as a large bird and a hand. Some other designs included a large flower, and another 'anklebiter' with a larger mouth and teeth.

The video was directed by Jordan Brune, who is a professional at animation and designing. He was told to make a 'special' video for a special song. He had said the video was, "an animated joyride that not only embodies the song's high-energy, guitar-pop-driven vibe, but it also features everything from little "Pac-Man"-looking circular dust-mite things to eagles wearing pillbox hats... And dancing disembodied hands." The music video was published on YouTube at June 26, 2013. 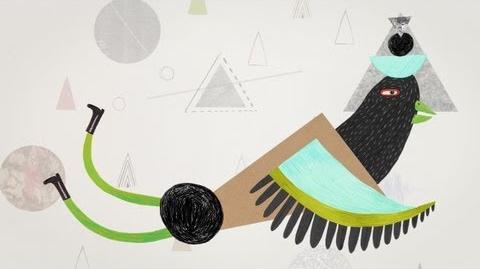 Why do you care what people think? Are you hooked up to their leash?
You know anklebiters ate up your personality.

Try to remember how it felt to just make up your own steps.
And let anklebiters chew up, spit out someone else.

And fall in love with yourself.

Why you wanna play someone and leave yourself to drop dead?
Someday you're gonna be the only one you've got.

What do you actually expect? A broken mirror to reflect?
You know anklebiters gave you a false perception.

Why you wanna play someone and leave yourself to drop dead?
Someday you're gonna be the only one you've got.

Since the band thought the song was special (and had become a promotion), a video game was created as well. This was a Fueled By Ramen special as well, and had been planned to be made before. It is available on Paramore.net, though you need to be a registered member to play. The game is similar to pac-man, and includes the same designs as the music video. Infectious Magazine had said the game was, "hipster's Pac-Man nightmare meets a collection of bad Dr. Seuss knock-off sketches."