Paramore Wiki
Register
Don't have an account?
Sign In
Advertisement
in: Single, Single from BNE, Songs,
and 6 more

"Brick By Boring Brick" is the fourth track and second single from the third Paramore studio album, brand new eyes.

The song Brick by Boring Brick is a story about a girl who escaped reality through pictures and fairy tales and anything that wasn’t the real story. This way, she’d look perfect to everyone else and we’d all think that she’s got it together. But being that it was all for show, it couldn’t last.

In the deluxe version of brand new eyes, Hayley Williams wrote in the booklet:

“I believe it’s important to stay young at heart. To have faith in what might seem impossible and to have goals beyond your current ambitions or temporary means. However, there is a huge difference, to me anyways, between acknowledging your dreams and never living in reality. Some people are so scared of being boring— so insecure with who they might be— that they build up this huge lie, it’s all one big distraction. For not only the on-lookers but for their self. To me, it is a selfish way to live. A great means of defense. But selfish nonetheless. I’ve been hurt by this lifestyle. Hurt by people I barely know. I’ve even been guilty of living this way. It’s so common. I’m glad that I’ve found some words to finally speak up about it.

A brick is such a traditional, tired and plain boring representation of solidity. I wanted the whole song to have this sort of fairy tale vibe… only to twist the point I’m trying to make in the song which is, ‘Stop living in a fake fairytale… like, WAKE UP!’ When thinking how I could really get that across in the song I decided I’d use a house. Someone’s safe place, even in a fairy tale… you can’t forge a refuge out of magic & fairy dust. You gotta build it just as real and as solid as a stupid old brick.”

The music video for "Brick by Boring Brick" was filmed in Los Angeles on October 8, 2009. It was directed by Meiert Avis.

In an interview with MTV, bassist Jeremy Davis explained that the band had created a treatment for the video before receiving further ideas from several directors. The video is Paramore's first to not be performance-based and some of the members of the band are only seen for a short period of time. It is also their first video to be filmed in front of a green screen and to have "a whole story behind it," with acting. Guitarist Josh Farro likened the video to the 2006 Spanish fantasy film Pan's Labyrinth. It was originally set to premiere on November 17 on The Hills but was later postponed. The video was eventually released on Paramore.net on November 23.

The video features a young, blonde girl who has many similarities to lead singer Hayley Williams. 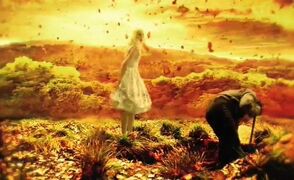 The young girl happily walks through a fairy tale land but as she gets deeper into the fairy tale the atmosphere changes and it suddenly becomes dark and evil. Hayley Williams also appears as a guide to her there. The ending

shows the young girl falling into a hole that lead guitarist Josh Farro had been digging throughout the video. Hayley Williams throws her doll into the hole after her and then walks away. Hayley seems to be the narrator of the story while Josh Farro digs a "deep hole," Jeremy Davis is a knight, Zac Farro is a robber, and Taylor York is a gnome.

The song received a positive review from Alex Fletcher of Digital Spy, who gave the song 4 stars out of 5. He said the song is "infectious, deliciously dark ("Well go get your shovel, and we'll dig a deep hole"), and packed with more energy than a Jedward dance routine – Williams sounds downright tremendous leading the "ba-ba-ba" climax – this should provide a welcome edge at the top end of the charts." The song also received a positive review from Vicki Lutas of the BBC, who awarded the song 5 out of 5 stars. She said that the song is "hair-raising BRILLIANT" and said "Listening to the lyrics is like entering a world where sandcastles aren't built, but buried, a world where the baddie is not the wolf, but the reality... and in this world, things are dark, but they're very real. There's a sense of longing; longing for those fairytales and longing for innocence, but it's coupled with a sense of realization that this will never happen."