Paramore Wiki
Register
Don't have an account?
Sign In
Advertisement
in: Single, Directed by Shane Drake, Songs,
and 7 more

"Decode" is a song by Paramore released as a single from the soundtrack to the film Twilight. It is also included as a bonus track on the international version of Paramore's third studio album, brand new eyes. An acoustic version of this song was released as a part of the special CD/DVD of the Twilight soundtrack. The song was released on the Twilight Soundtrack with the song I Caught Myself, though this had become a single and I Caught Myself became apart of The B Sides. The song was certified Gold in the U.S on March 12, 2009, selling over 500,000 copies. It is also nominated for a Grammy Award in 2010 for Best Song Written for a Movie.

Hayley Williams said she "chose the title "Decode" because the song is about the building tension, awkwardness, anger and confusion between Bella and Edward. Bella's mind is the only one which Edward can't read and I feel like that's a big part of the first book and one of the obstacles for them to overcome. It's one added tension that makes the story even better." 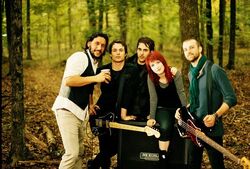 The official music video premiered on November 3, 2008 on MTVu, MTV, MTV2 and on MTV.com and was directed by Shane Drake. The video features the band members walking and performing in the woods, in Nashville, Tennessee (even though in the video, it is clearly supposed to be Forks, Washington). While they play, there are also scenes of the band acting as tracker vampires searching through the woods. There are also scenes showing the wind blowing through Williams' hair (which is red in color). Scenes from Twilight are also inter cut. The music video, along with the film trailer, were shown in the North American theater of PlayStation Home from December 11, 2008 to December 18, 2008.

How can I decide what's right?
When you're clouding up my mind
I can't win your losing fight all the time
How can I ever own what's mine
When you're always taking sides
But you won't take away my pride
No not this time
Not this time

The truth is hiding in your eyes
And its hanging on your tongue
Just boiling in my blood
But you think that I can't see
What kind of man that you are
If you're a man at all
Well I will figure this one out
On my own
I'm screaming, I love you so
On my own
My thoughts you can't decode

Ooh, there is something
I see in you
It might kill me
I want it to be true