"Future" is a song written by Hayley Williams and Taylor York. The song is the closer of Paramore's self-titled record. This is the band's longest and most instrumental-based song and was #1 in a weekly playlist by Alternative Press for very long songs.

This song had received generally positive reviews by Billboard, Pop Dust, and Alternative Press. Billboard had reviewed this track along with the others from the album and had said, "This nearly eight-minute cut begin quietly, encouraging listeners to keep looking ahead and following their dreams as light guitar riffs pluck along -- but then morphs into a furious hard rock session, free of lyrics. It's a proper end to the set—gentle and aggressive all at once." Pop Dust, giving the song an overall 4.5/5 stars, had said, "Paramore packs itself tightly with emotional highs and lows, so it makes sense that its final track would start off as something of a breather, with Hayley Williams’ declarations of “riding the future” barely uttered over a dorm-room guitar strum. Eventually, the music blossoms, Williams’ wordless utterances accompanying the simple riffs; those then gnarl and grow, getting deeper and more rounded-out as drums and a feedback-heavy guitar solo crash in to take center stage". They continued on saying "“Future” hints at the idea that this band left a lot of ideas off the record, and it makes the prospect of Paramore extending its discography into space all the more exciting." As Pop-Dust finished off the review, the website had hinted that with this song there will be many more to come, as this left off fans with a slow tune. Alternative Press (who featured this song in a weekly playlist), had said "it may start off as a subdued acoustic closer a la Jimmy Eat World’s “My Sundown,” but the fluid transition the song makes into a sustained sonic explosion at the 3:30 mark leads to waves of chills. Williams’ lyrics are sparse (“I’m writing the future… We don’t talk about the past”), and they become nonexistent once she turns the song over to York and Davis, who muscle through it for four-and-a-half minutes, all distortion and screeching guitar leads and crashing cymbals and even a false ending." 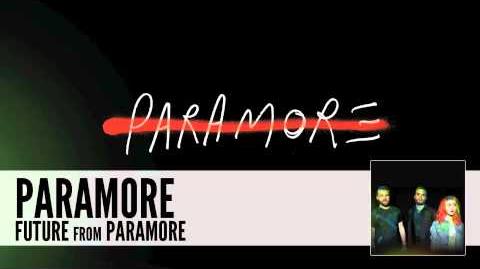 This song was [officially] released at YouTube on April 16, 2013, with other songs from the same album. The recorded, finished song was seven minutes and 52 seconds long. The background used for the audio-video was a Paramore logo crossed off with a red water-color like a brush. On the right there is a fading green shade, going from a high hue based green to a faded away, darker green. The background was the same one from when Ain't It Fun was still using the audio version. This song was the first in a play-list by the Alternative Press staff. The song is available on iTunes for a single download, and for an album download all-together (with the other 16 songs).

The song had started off with Hayley Williams and Taylor York talking, similar to acoustic songs found on 'The B-Sides'. Then after a few seconds, Taylor had asked her if she's ready, as the song started... trailing off the acoustic feeling. The lyrics were sung in the beginning minutes of the song, as a heavy guitar-like rhythm started up. This followed to a heavy bass play where as Jeremy Davis and Taylor slowly started to change the volume of the instruments. A little after the middle, the song had ended with the last low note, trailing back on to a few high notes right after the silence. Then the song continued on in a high-medium volume, finishing off 8 seconds before the song could reach eight minutes.

So, I'm writing the future.
I'm leaving a key here.
Something won't always be missing.
You won't always feel emptier.

So, just think of the future.
Think of a new life.
And don't get lost in the memories.
Keep your eyes on a new prize.