Role in the band

She is the primary songwriter of the band

In 2002, at age 13, Williams moved from her hometown Meridian, Mississippi, to Franklin, Tennessee, where she met fellow band members Josh Farro and Zac Farro in school. Shortly after arriving, she began taking vocal lessons with Brett Manning. 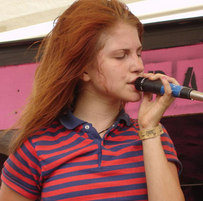 While still in school, she tried out for a local funk cover band called The Factory, where she met bassist Jeremy Davis. Williams introduced the boys together, and Paramore began. In 2005, John Janick, founder of record label Fueled By Ramen, signed a contract with them.

Before joining Paramore, Hayley was part of a Christian musical group in 2003 called the Mammoth City Messengers. The group was apart of a project that didn't work and ended in 2004.

On February 05, 2021, she released her second solo album, a prequel to Petals for Armor, FLOWERS for VASES / descansos.

Williams is a guest singer on 'Fallen' by Death In the Park (which she has occasionally performed live with the band), 'Then Came to Kill' by The Chariot, 'Keep Dreaming Upside Down' by October Fall, 'Tangled Up' by New Found Glory, 'The Church Channel' and 'Plea' by Say Anything, and 'The Few That Remain' by Set Your Goals, and appeared, along with the band, in the music video for "Kiss Me" by New Found Glory. In the 2007 Kerrang! Readers' Poll she finished second to Evanescence's Amy Lee in the "Sexiest Female" category, going on to win the first place spot for "Sexiest Female" a year later in the 2008 poll. She also appears as a playable character in the video game Guitar Hero World Tour. On October 2, during Brand New Eyes Fall US Tour, it was announced that a few tour dates were postponed due to Hayley Williams becoming infected with laryngitis. Hayley had written the song 'Teenagers' by herself as a track for the film Jennifer's Body. The song was once played by Paramore, though it was never officially released.

In 2015, Hayley was featured in 'Vicious Love' by New Found Glory, and in the song 'Bury It' by CHVRCHES.

The latest featuring Hayley did was with the band American Football, in the song 'Uncomfortably Numb', released in January 2019.

Williams has said that her favorite bands/artists are The Cure, Bjork, Saves The Day, mewithoutYou, Whitney Houston, Slick Shoes, The Chariot, Now Now, Radiohead, Every Children, No Doubt, Canon Blue, Fireworks, Set Your Goals, Tegan and Sara, H2O, Lemuria, and The Swellers.

Hayley Williams had been a Christian all her life and had focused many of the songs she wrote in Paramore on her attitude, her faith, and her ideas.

In the September 2009 issue of Alternative Press #255, Williams and Paramore guitarist Josh Farro confirmed they had been dating for nearly three years before splitting in the fall of 2007. "We didn't know if it would look bad," says Williams. "We were so young, and it seemed like it would look like a big joke," Josh adds. "We didn't want the band to be about me and Hayley being in a relationship together because then [the band] would be about our relationship, not our music. It distracts people from the whole point of being in a band." Their relationship was later confirmed again by Josh Farro in his "Exit Statement.".

Williams is good friends with fellow artists such as Brandi Cyrus, Miley Cyrus, Taylor Swift, Bethany from Best Coast, and several other not well-known bands, such as Fun., and The Swellers.

Williams runs a hair-dye company called GoodDyeYoung alongside her long-term friend and hairdresser, Brian O'Connor, since 2016.

On January 1st, 2015 Hayley announced her engagement to Chad Gilbert on Twitter. They married on February 20th, 2016. On July 1, 2017, Hayley and Chad Gilbert announced they had split up after nearly ten years together and a year of marriage. The song 'Dead Horse', featured on her solo album 'Petals For Armor' tells about their relationship and how unhealthy and toxic it was.

With the release of Petals for Armor, Hayley states in songs like "Taken" and "Crystal Clear" that she is currently in a relationship with someone. She even mentioned have fallen 'deeply in love' in her 'thank you' note on Petals for Armor release day. And in a interview with actress Anna Faris for her podcast 'Anna Faris is Unqualified', she confirmed she is in a relationship - a healthy one.