Paramore Wiki
Register
Don't have an account?
Sign In
Advertisement
in: Single, Single from Riot!, Directed by Shane Drake,
and 9 more

"Misery Business" is the fourth track off of Paramore's second album Riot! and the first single. This is also their first mainstream hit on all genres that Paramore gets pushed toward. It reached number 26 on the US Hot 100, number 3 on US Alternative Songs, and number 12 on US Pop Songs.

In an interview with the Manchester Evening News August 9, 2007, guitarist Josh Farro described how the background to this song concerned vocalist Hayley Williams enough to post a message on the band's Live Journal page, asking her fans to post what they were ashamed of: "The song is about a girl who ruined one of our friend's lives with sex, using her sexuality to get what she wanted. And it really affected us, watching him crumble. So, when Hayley wrote 'Misery Business,' she posted online how she wanted to encourage our fans not to be scared to say what you feel or what you're ashamed of, because once you do, you're setting yourself free. We had a huge response. There were some people that were embarrassed of using drugs, drinking, or sleeping around or having gay sex. Everything, really. There were a few parents who replied, ashamed of how they raised their kids."

The song was eventually retired on September 7, 2018, and last played in Nashville. The reason for the retirement of the song was because of the lyrics "Once a whore, you're nothing more, I'm sorry, that'll never change." and that Paramore had grown up. This decision has made many fans feel outraged and many of them want them to brick the song back. It's unknown if they took back their decision as September 7, 2018, Nashville concert is currently the last concert they performed at.

On an interview to Vulture, in 2020, Hayley confirmed that the song was about Josh's ex-girlfriend. 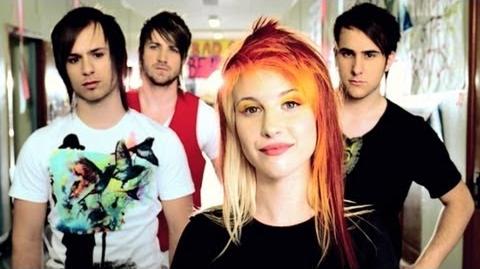 The music video was filmed at Reseda High School in Reseda, California, on December 21, 2006, and features a school and a band performance. It is directed by Shane Drake who also directed the videos for "Pressure" and "Emergency". It stars Amy Paffrath as the bully.

The music video starts out with the band playing the song with an assortment of "RIOT!"s (a reference to the albums name) in the background. It switches from the band playing to a high school, where a girl in a blue dress and heavy makeup walks in. The girl pushes the school cheerleaders aside her as she walks into the hallway. She cuts off a girl's braid with scissors, grinning at the girl while showing it to her. Later, as she is walking down the hall, a boy comes out of the nurse's station with his arm in a sling. She proceeds to push him into the wall, further injuring him. The band plays more, and the girl walks up on a girl and a boy together, obviously in love. She pushes the girl's face out of the way, and goes into a passionate kiss with the boy, then leaves, smiling. It switches again to the band playing, then the band comes out of a classroom together. Hayley Williams (a student body president and incharge of the high school) and the girl confront each other in the hall. Hayley reaches into the girl's bra and pulls out "false" pads, then uses a towel and wipes the girl's makeup off, exposing her for what she is. The video ends as the band finishes the song; and they walk away as Zac Farro turns around and laughs.

I'm in the business of misery,
Let's take it from the top.
She's got a body like an hourglass it's ticking like a clock.
It's a matter of time before we all run out,
When I thought he was mine she caught him by the mouth.

I waited eight long months,
She finally set him free.
I told him I couldn't lie he was the only one for me.
Two weeks and we caught on fire,
She's got it out for me,
But I wear the biggest smile.

Second chances they don't ever matter, people never change.
Once a whore you're nothing more, I'm sorry, that'll never change.
And about forgiveness, we're both supposed to have exchanged.
I'm sorry honey, but I'm passin' up, now look this way.
Well there's a million other girls who do it just like you.
Looking as innocent as possible to get to who,
They want and what they like it's easy if you do it right.
Well I refuse, I refuse, I refuse!

Whoa, I never meant to brag,
But I got him where I want him now.

Whoa, I never meant to brag
But I got him where I want him now.
Whoa, it was never my intention to brag
just steal it all away from you now.
But God does it feel so good,
Cause I got what I wanted now
And if you could then you know you would.
Cause God it just feels so,
It just feels so good.