"Part II" is the seventh track from Paramore's fourth studio album "Paramore". This song is a sequel to Let the Flames Begin. Part II was in the set-list of the self-titled tour, which includes the Monumentour as well.

The song, though being the 'second part' of another song, is not a single. On April 16 (a week after the self-titled album was released), a audio of the song was released on YouTube, along with the other 16 tracks from the same album. Part II is currently available on iTunes, though had never received an award alone- most likely due to the fact it is not a single. Part II is the second most instrumental song, before 'Future'; which was mainly instrumental on its own. The third instrumental song of the album would be 'Grow Up'.

The song starts off with an instrumental tune, which is similar to the ending sound of the song, though it does not feature any drum beats yet. There is a beginning guitar tune from York, as it slowly continues with Jeremy Davis playing his bass. The lyrics then kick off to a wording that is very similar to Let the Flames Begin; using words such as "what a shame" and "we all remain" instead of "we all became"... showing that this is the continuation of Let the Flames Begin. Other words similar are "oh glory" and "such fragile broken things". After the first lyrical part, the drums start to kick in as Williams' sings "oh glory, come and find me" for the second time. Then the sound and the voice of Williams' starts to raise as the "dancing all alone" verse starts. The next verse has a very similar bass tune towards the first part of the song, as the bass collides with the guitar sounds. After another verse by Williams', a long instrumental starts (where the drums first start). The lines "I'll be lost until" are sung, where the ending hook is given. The ending hook is very similar to the Monster outro first sung by Williams' during a live performance in 2012. In the Monster outro, the lines "so if you let me, I will look and try" are put instead of the line "so if you let me, I will catch fire" in Part II.

"I don’t think that it was an intentional thing to write a sequel to Let The Flames Begin, but I started writing music to a song and it just had a really similar feeling, a similar emotional connection. And I think, when Hayley started writing to it, that theme just kind of came out. And some of the lyrics kind of mirrored, kind of alluded to Let the Flames Begin. It definitely wasn’t planned. We didn’t go into the record thinking we need to make a sequel to this. It just kind of organically happened. Actually, real talk, me and Hayley’s favorite band in the world mewithoutYou, which is on this cruise, we worship everything they do, they always kind of write Part IIs to their songs, and as mega-fans it’s always like OHHHH it’s so cool. It’s always a special thing for us as fans. So we were like, maybe we can do something like that." - Taylor York

"What we also tried to do was cater to some of the songs from our old record, because we don’t want to exclude any of our old fans. They’ve been there for us. We wanted them to have something they were used to, too. That was hard, actually — to write very Paramore sounding songs, when everything had changed. The song kind of stands for that." - Jeremy Davis

"There’s still other songs that I think that would never be on the radio that get, it’s a different kind of response. Part II, there’s just nothing like that. That song will never be on a radio station. … that song doesn’t need that sort of following in order to connect." - Hayley Williams 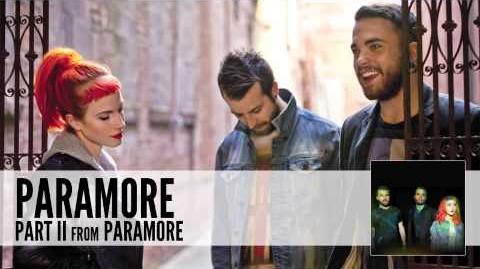 Part II has had mostly positive reviews from many different websites. Billboard, Idolator, PopMatters, Spin, Pop-Dust, and MTV Buzzworthy all had reviewed, or at least gave a positive message to the song. Billboard had said, "this song's the sequel to "Let the Flames Begin" from their "Riot" album, opening with the same "What a shame" line. "I will catch fire to let your glory and mercy shine," Williams sings—ready to sacrifice her happiness for others. It's a sullen cut, but its frenetic drum and guitar solos are fit for an action sequence in any Michael Bay film." This has mentioned a positive gesture towards Let the Flames Begin as well. Idolator had mentioned, “Grow Up” and ’80s new romantic-tinged “Part II” aren’t locked into the rigid matrix of a four-to-six chord power riff that was Paramore’s heartbeat for their first three albums, and both songs feel looser and more creatively unhinged as a result." The review also had mentioned Part II as the best song on the album which was not a single. Pop-Matters has reviewed this song as one of the best 5 things available on the self-titled album, continuing on saying, "aside from the general atmosphere and timbre of the songs, the two tracks share a lot of the same lyrical and musical material. And although neither song is strictly narrative, “Part II” feels like what comes after “Let the Flames Begin”. It had continued on, mentioning the chorus while saying, "The chorus of “Part II” slightly changes the content of the chorus in “Let the Flames Begin”. In the original song, the chorus refers to an “us” dancing together, but in “Part II”, that “us” becomes a “me”, explicitly stating that the narrator is “dancing all alone”. Spin (the website), had mentioned Williams' in the line "they do. They don't hurtle like they used to — the meat/potatoes punk-pop on the album's first third is stiffer than it was, and that sequel, "Part II," is goopier than its predecessor — but Williams doesn't need to be kept focused anymore." The site had continued on with the story of Williams' being signed to Atlantic Records, and the formation of the band. Pop-Dust has said, "Williams sings of the way her heart’s been scarred by love, getting downright melancholic as she begs for glory to come and find her. The instrumentation on this particular track is reminiscent of a brewing storm, and the way it ends—with no real resolution, just Williams asking for a second chance as the drums fizzle into nothingness—is jarring, yet appropriate." MTV Buzzworthy gave a short song review of Part II, stating, "If the band’s been wandering far from home on these early tracks, they make it back in time for dinner on “Part II,” a song that builds chugging chords into the kind of rushing chorus Paramore always crushes. Even here, the band’s expanded palette shows — listen carefully for little electronic tones in between York’s distortion assault."

What a shame, what a shame we all remain
Such fragile broken things
A beauty half betrayed
Butterflies with punctured wings

Still there are darkened places deep in my heart
Where once was blazing light, now
There's a tiny spark

What a mess, what a mystery we've made
Of love and other simple things
Learning to forgive
Even when it wasn't a mistake

I question every human
Who won't look in my eyes
Scars left on my heart formed patterns in my mind.

Oh Glory
You will find me

Fighting on my own,
In a war that's already been won
I'll be lost until you come and find me here
Oh Glory

(I'll be lost until)

Like the moon, we borrow our light
I am nothing but a shadow in the night